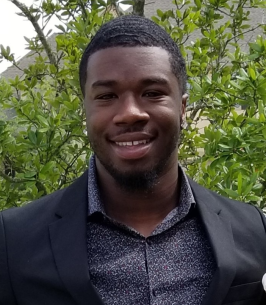 Carlton Alexander Warren was born on December 2, 1996, to Mr. Willie and Tessa Warren in Houston, Texas. He accepted Christ as his Lord and savior at a young age. He was baptized as a member of First Gethsemane Baptist Church, Louisville, KY, under the late Dr. T. Vaughn Walker. After the family relocated to Houston, Texas, Carlton became a member of Southwest Community Christian Center, under Dr. Gregg J Patrick.
Carlton grew up in Louisville, Kentucky where he exceled in both football and basketball at a very young age. Basketball was his first love. While attending Johnstown Rd Elementary, he was a member of the basketball team where he was coached by his dad. His mom cheered him on as the cheerleader coach. In Middle School he played basketball for the Crosby Cougars while being coached by his father. Carlton also played AAU Basketball for one of the most successful teams in Kentucky. He traveled across the country playing games. Unfortunately, during his 8th grade year he suffered a broken hip which required multiple surgeries and lots of rehab. He was able to make it back from this injury by his 11th grade year at Eastern High School. He finished his last year of High School and basketball at Kempner High School in Sugar Land, Texas.
In June of 2015 he graduated from Kempner High School with his loving family and two loving Grandmothers by his side. He attended Alabama A&M University for 2 years. He was later employed by Amazon working from an entry level position.
Carlton was a loving brother to his 3 younger sisters. He loved making others laugh. He often referred to himself as “C Banks” from the Fresh Prince of Bel-Air. Like his dad, he dressed the way he wanted to be addressed. Carlton was a very charming young man and popular with everyone. He had a helping spirit that was second to none. Carlton would always lend a helping hand to anyone he encountered.
Carlton Warren was welcomed into the eternal presence of the Lord as he departed this life on December 24, 2021, which is also his sister’s birthday (Amber). He was welcomed home by his loving Grandmother: Naomi Ruffin Dixon (Ranie), Grandfathers: Richard Mitchell, George Warren, Sr. Great-Grandmothers: Rosa Lee Harris, Ophelia Ruffin, Beatrice Ruffin, Veola Warren.
His beautiful memories will be cherished by: his loving parents, Willie & Tessa Warren; 3 beautiful and loving sisters, Amber, Brianna, and Destiny Warren. Like a brother, Antwan Dixon. A very loving and caring Grandmother, Brenda (Eugene) Carter. Great Grandmother, Fannie Mae Mitchell. Uncles George Warren, Jr, George Warren, III, Thomas Warren (Amanda), Detrick Carter (Marcy), Rodney Carter (Allana), Edward Carter (Carrie), Larry Carter, Carlos Glaster (Ambia) and Rev Joseph Edwards (Sharon), Andre’ Warren (Sabrina) Landy Warren, Leroy Warren, Roy Lee Warren. Aunts, Bridget Carter, Deborah Warren, Shirley Warren, Jackie Agee (Andre), Julia Mae Watkins (Jerome), Abderlla Pearson (Billy), Tameka Lockett (Russell) Arnetha Warren, Sonja Warren, Eddie Bickham, Jewioner Harris and a host of cousins.