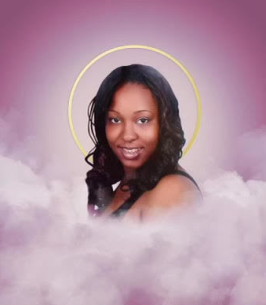 Courtney L. Benson (Phoonanny) was born to the late Dorothy Benson and Robert Sanford, in Harlan, Kentucky on March 1, 1983.
Courtney confessed Christ at an early age and believed that Jesus was her Lord and Savior. In 1987, she moved to Alabama with her family at 4 years old, where she lived in Wylam area before later relocating to the Ensley area.
She attended public school in Birmingham, AL.

To know Courtney is to love her. She is known to be a firecracker with a heart of gold and a love like no other. For those, who she loved, she would cross mountains and fight lions for them.

Courtney was a mother figure to many and the backbone of her family. Her memory will forever live on in the hearts and minds of those who she loved and cherished. With her sensational smile, remarkable sense of humor, go getter spirit, she left a lasting impression on everyone she met.

She founded the rap group MOBWIVES ENT in 2012. During her musical career, she recorded numerus songs, and wrote ample music. She enjoyed recording skit-like music videos, rapping, hosting parties, and spending time with her family. She also had a passion for shopping.

Her young life came to an end on July 22, 2022. She is preceded in death by her parents; her brother, Johnny Ray Benson (Lil Man); her uncles, Frank Fella Jones, Robert Kidd, Nathaniel Benson; her aunt, Reva Nell Byrd; her grandparents; a special cousin, Sonja Armstrong; and a nephew, Fredrick Thompson.