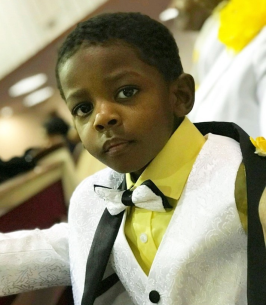 Grayson Cannon Branch, the son of David Cannon and Richjetta Branch, was born on July 21, 2015 in Birmingham, Alabama. He was such an inspiration and bundle of joy who touched the lives of so many.

Grayson attended Lollipops and Gumdrops Daycare, University Place Elementary, and most recently attended Tuscaloosa Magnet School - Elementary where he enjoyed every aspect of his educational experiences. He attended Faith Apostolic Church, under the leadership of Suffragan Bishop Michael Bender, where he loved to worship and enjoy the presence of God.

Grayson enjoyed such a vibrant life while spending time with friends and family and enjoying many extracurricular activities. He was a gifted young basketball and baseball player, a good swimmer, possessed great athleticism, earned six belts in karate, and absolutely loved to bowl. People who knew him were assured that he had every intent of enjoying each moment of the day.

Possessing a heart of gold, he indeed demonstrated love and affection beyond measure for his parents, grandparents, relatives, pastor, and friends. His intuitiveness allowed him to exude true love for others and feel the hurt or pain that others may have experienced. Grayson was such a gifted and unique child.