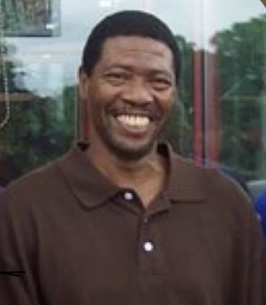 May 24th, 1963 was a beautiful and blessed day for the late James and Jannie Tolbert as they welcomed the birth of their firstborn son, Modis Edward. He was the third child of eight children God blessed this couple to conceive and raise.

Modis grew up and was raised on Dogwood Road in MONTEVALLO, AL. He attended the Montevallo School District and played football at Montevallo High School.

He was baptized as a child at Pilgrim Rest Baptist Church in Almont where he sang in the church choirs throughout his life. He served as a Usher and was a member of the Crusaders.
Modis was a huge Alabama Crimson Tide football fan and loved watching all college and professional football and basketball teams.

On May, 2010, he joined The Harvest Place Christian Church under the leadership of his cousin, Apostle Wales Williams, Jr.  There he served on the church security team as well as sang with The Male Chorus.

While attending the Harvest Place, Modis rededicated his life to Christ and began his true journey as a Foot Soldier for Christ.  He loved the Lord and he loved people.  God graced him with favor wherever he went and wherever he was.

Being human he made mistakes, but he knew from being taught as a child that God is just and willing to forgive.  He was an example to others how good and merciful God is.  His life and generosity towards others are the only Bible most of them had seen.  His love of giving caused him to share whatever he had with others less fortunate than himself. He was always smiling and was just a fun person to be around. His battle with serious medical issues in recent years showed his courage in facing life challenges with God and strong faith. Despite the pain, Modis NEVER gave up on God and stayed strong and faithful until the end.
He’s dubbed a “Foot Soldier” because he walked almost every place he went.  He left footsteps in the sands of life, yet when no footsteps could be seen, we know it was then God carried him.
He grew to trust God and lean totally on Him in every situation.
His greatest joy was his family.  He loved the food and fellowships they shared.  He helped raise most of his nieces and nephews. He shared a special bond with his cousins, Donna Gentry, and Brian Tolbert.

Preceding him to glory was his father and mother, James and Jannie Tolbert.  His brother, Frederick Dewayne Tolbert.  His grandparents, Henry and Flossie Tolbert, and Leon and Elnora Brown. Two nieces, three nephews, Aunts and Uncles and cousins whom he loved and they all loved him.