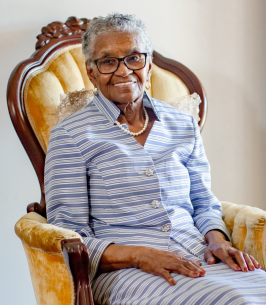 Roxie was a faithful member of Unity (Porter Chapel) Christian Methodist Episcopal Church where she served as a member of the Senior Choir, Director of Christian Education, President of the Missionary Society, Stewardess Board, and Sunday School Teacher during her membership. On the Birmingham District of the Christian Methodist Episcopal Church, she has served as President of the Missionary Society (1975-1977), Financial Secretary of Lay for eight years, and Division Leader. Nationally, she was a Life Member of the National Missionary Society, and served as Correspondent to the World Federation of Methodist Women for 9.5 years. Roxie retired after twenty years of service as a Claims Adjuster with the Social Security Administration.