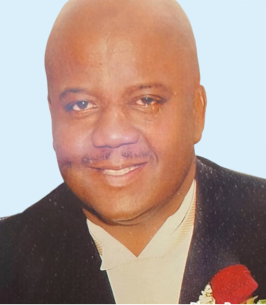 Vincent Antonio Bryant also known as “Heavee” was born on May 25,1963 to the late William Bryant and Dorothy Little. He confessed to Christ at an early age under the Pastoralship of the late Reverend B.B. Strowder and continued his membership at Macedonia Baptist Church under the leadership of Pastor William E. Scott.

Vincent attended Hueytown High School and graduated with the class of 1981. He enjoyed being a football player and continued with the sport at University of North Alabama. He later attended RETS Electronics School, and retired with 32 years from United Parcel Service. Vincent later worked for Hoover City Schools, Fairfield City Schools and Penske in the department of transportation. He loved deer hunting, could be very silly at times and was a loving father. Vincent’s favorite Bible scripture reads “The grass withers, the flower fades, but the word of our God will stand forever.” Isaiah 40:8